After finding that these sand paintings hanging on my grandma’s wall, had information and Native American Mythology printed on the back. I thought I would share it with the world. The follow article is about “Zuni Rainbow Man”, “The Yei Bichai Dance Ceremony”, “Road Runner”, “The Creation Story”, “Talking God Spirit”, “The Creation Story”, “The Rain Cloud”,  and “Great Spirit of Four Forces” 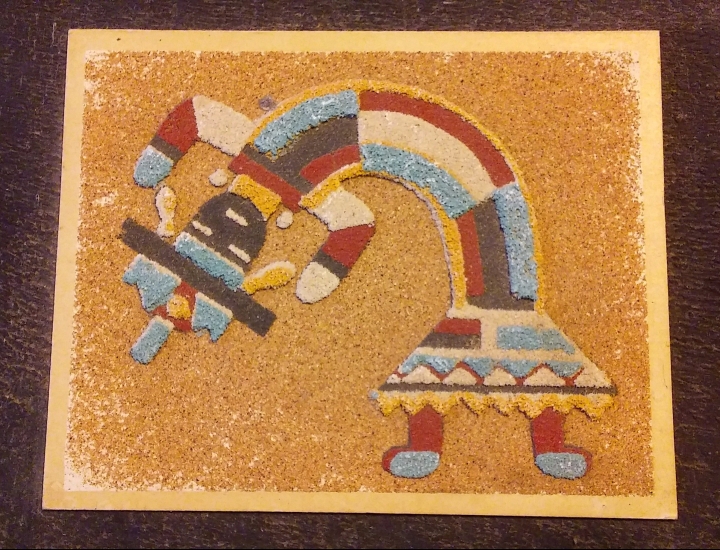 “The Pueblo tribes of the Southwest considered the Rainbow as a sign from their Great Spirit showing his greatness and protection. They appointed a Spirit known as the Rainbow Man in charge of this activity. – This picture is composed entirely of natural earth material gathered from the Southwest deserts and mountains. 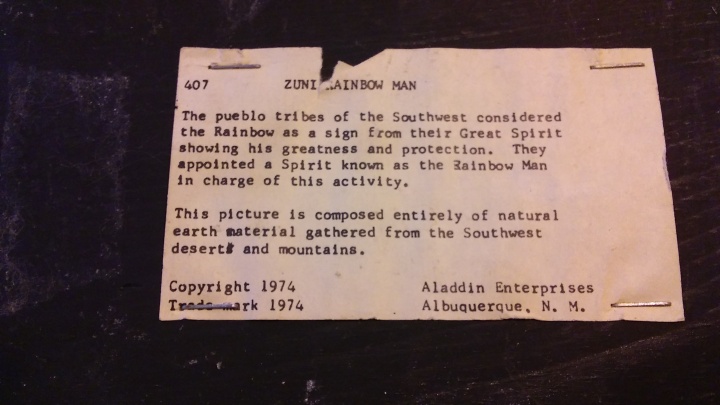 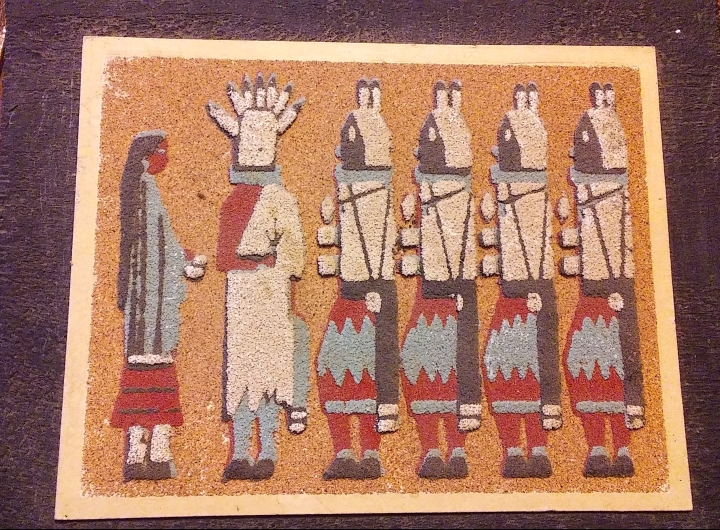 “The Yei Bichai dance ceremony is a complicated 9 day ritual, which involves the initiation rites of both boys and girls of the Navajo Tribe. To introduce them to the secrets of the Gods. The children first have their hair washed, a standard act of purification and are blessed with a sacred meal and Yucca leaves by the masked figures. The talking God of the East places his mask on the children so that each child may view the world thru the eyes of the Yei Bichhai. – Each member of the tribe has to participate in this ceremony four times during his life . The divine Yei Bichhai’s also offer their divine gifts to participants 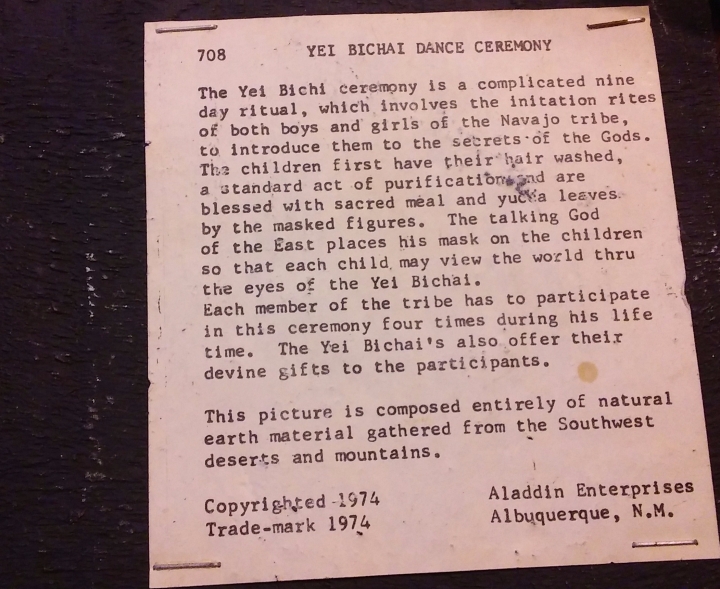 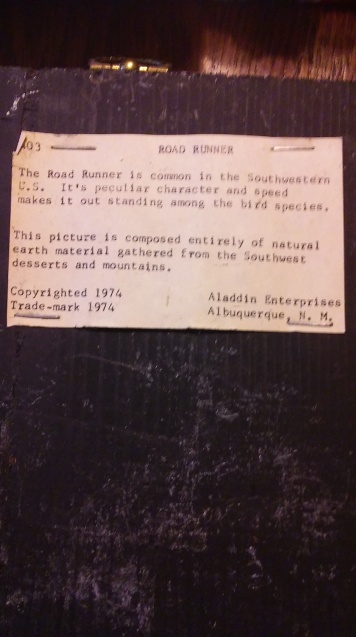 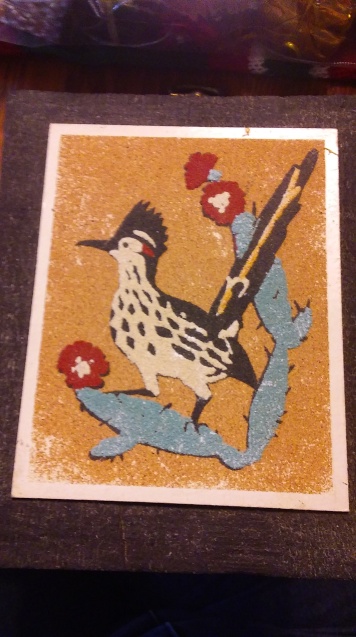 “The roadrunner is common in the South Western U.S. It’s peculiar character and speed makes it outstanding among the bird species. 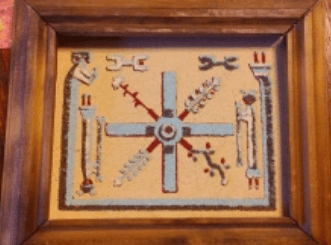 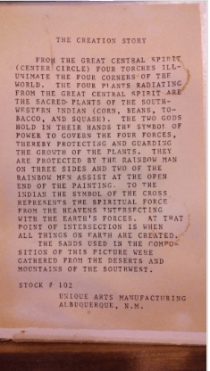 “From the great central spirit (center circle) four torches illuminate the four corners of the world. The four plants radiating from the great central spirit are the sacred plants of the southwestern Indian (corn, beans, tobacco, and squash). The two Gods hold in their hands the symbol of power to govern the four forces. Thereby protecting and guarding the growth of the plants. The are protected by the Rainbow Man Man on three sides and two of the Rainbow men assist at the open end of the painting. To the Indian the symbol of the cross represents the spiritual force from the heaven intersecting with the earth’s forces. At that point of intersection is when all things on Earth are created. 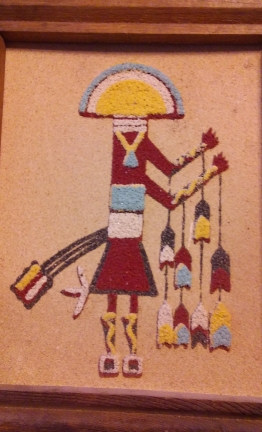 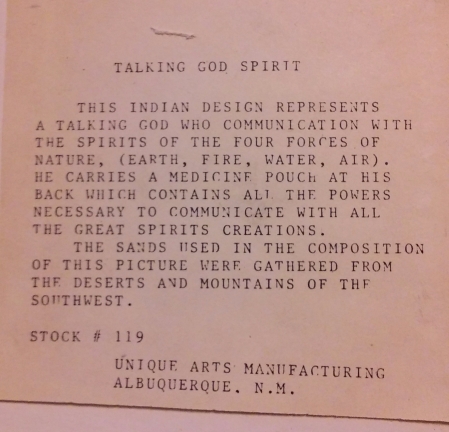 “This Indian design represents a talking God who communication with the spirits of the four forcesof nature, (earth, fire, water, air). He carries a medicine pouch at his back which contains all the powers necessary to communicate with all the great spirits creations. Unique Arts Manufacturing Albuqurque, NM” 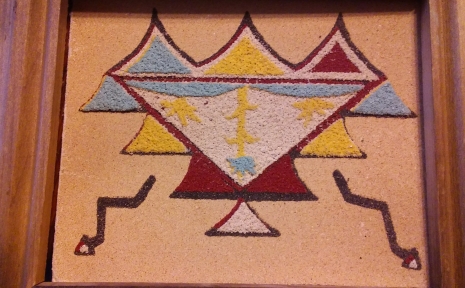 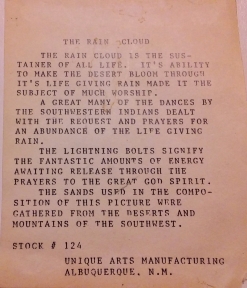 “The rain cloud is the sustainer for all life. Its ability to make the desert bloom through it’s life giving rain made it the subject of much worship. A great mass of the dances by the Southwestern Indians dealt with the requests and prayers for an abundance of the life giving rain. The lightening bolts signify the fantastic amounts of energy awaiting release through the prayers to the great God spirit. Unique Arts Manufacturing. Albuqurque, NM.” 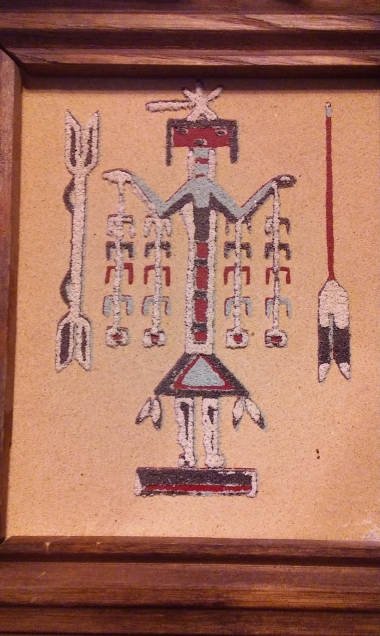 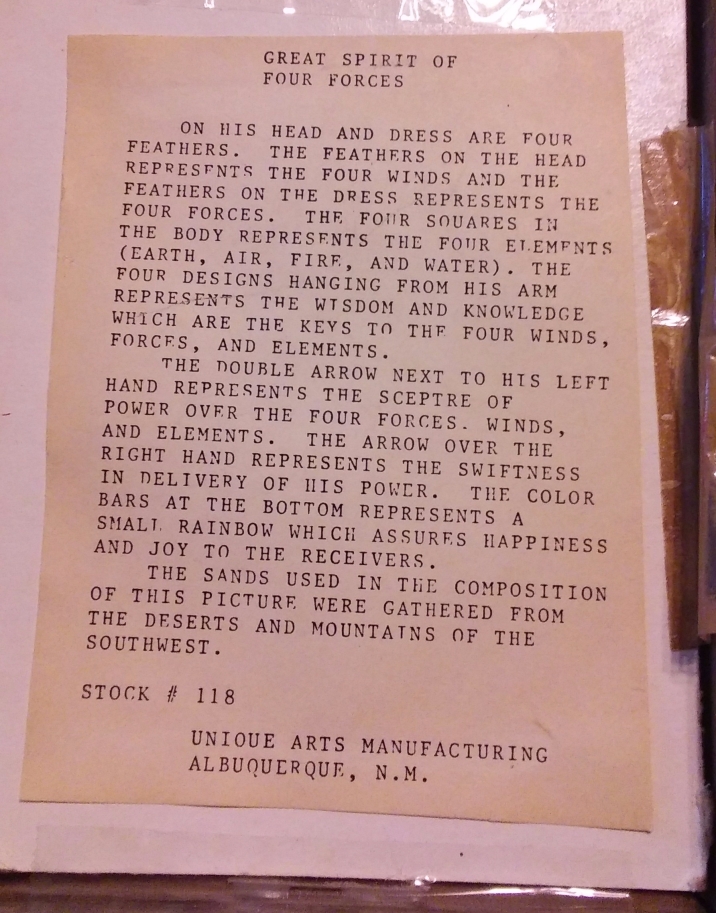 Thank you for stopping by and reading an article, check out any others that catch your attention!

Libra sun, Aquarius moon, and Aries Ascendant. Talk to me about the moon, astrology, magic, and tarot. View all posts by Destiny

I am a participant in the Amazon Services LLC Associates Program, an affiliate advertising program designed to provide a means for us to earn fees by linking to Amazon.com and affiliated sites. Read the Disclosures Page for more information!